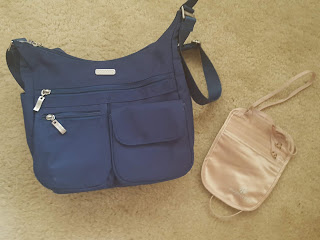 Having planned carefully (so I thought) I found some things I packed for my three week trip to Europe turned out to be super-helpful – and other things, much less so. Learn now from my mistakes, kids.

The Baggalini purse on the left was awesome, with pockets for EVERYTHING. Comfortable, lightweight, adjustable strap… I would marry this purse if I could.

Pro-tip: If you’re like me, and rarely change your purse, switch to your “travel purse” a week or two before the trip, so you can get used to it. 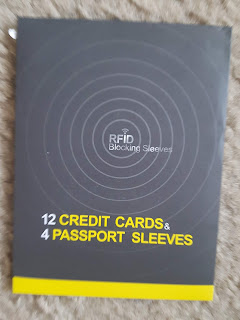 I thought the little silk, under-the-clothes purse would be handy, but I never used it. It was just a little too small to fit in all the things I needed, and the neck string was irritating.

This set of credit card and passport sleeves – I don’t know whether they actually protected me from having my information lifted, or were an unnecessary precaution. But there were no issues and made me feel more secure, so I’ll go with, worth the investment (under $10 for the set). 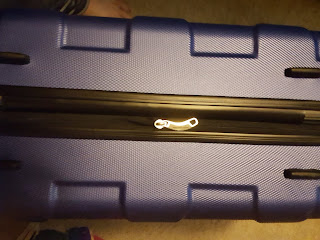 Small(ish) suitcase with an EXPANSION ZIPPER and wheels that go in ALL the directions. OMG, yes! Provided you are not too close to pushing the baggage weight limit, it will provide just enough room for souvenirs (if you don’t go too overboard on them), for the return leg. 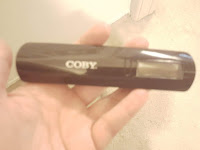 Which brings us to: small hand-held baggage scale. I got this (along with my suitcase) at TJ Maxx. It will weigh a suitcase in both kilograms and pounds, necessary for an American flying both domestic and internationally.

Rather than a standard carry-on, I bought this Victorinox travel backpack (again, with the zillion pockets!!) It even had a padded pocket that is perfect for a small laptop or a Kindle. 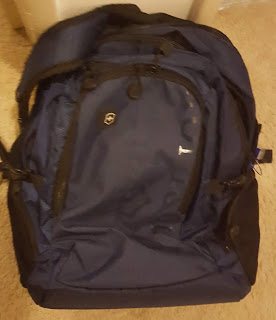 The amount of things it could hold and still fit under an airline seat or into the overhead bin was truly remarkable.

This was both a good thing, and a bad thing, as I discovered the first day I loaded it up to go touristing. The sucker got progressively heavier and heaver as the day went on, even WITHOUT adding significant souvenir weight.

I swear, I think there were gremlins adding invisible bricks to it. 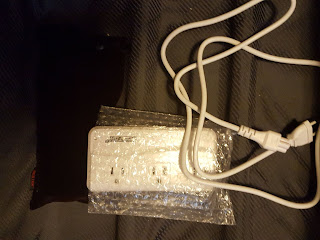 Converter kits – I bought this one, which had plugs and attachments for both the UK and France. Heavy, but worth it, as we had not only cellphones and Kindles to charge, but standard “plug” units for our camera batteries.

Even though our AirBnB hosts had some converters, this power converter was still something we used every day. 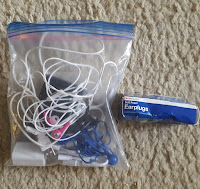 Do: put extra electrical cords, earbuds, and charging plugs in a ziploc bag for ease of getting to them. Do NOT forget to bring a charging cord with you everywhere you go. DO bring earplugs (but maybe not a whole box of them). 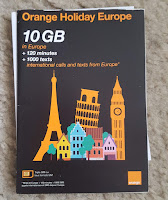 If you are not 100% certain you can use your phone in Europe, DO buy an “Orange Holiday” SIM card at the earliest opportunity.

I missed out on meeting a wonderful friend in London, and almost lost my mind when my niece and  I got separated at the Louvre and we couldn’t communicate, due to lack of the European SIM card in my phone. Also due to my phone running out of juice because I was carrying these recharging batteries but did not have a cord with me. *heavy sigh* 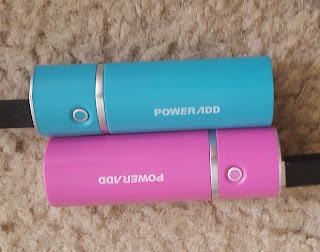 These portable batteries, on the left, one of the best trip purchases I made. Inexpensive, (relatively) lightweight, and powerful, I used them every day we were out and about. By buying different colors, it also helped me track which one was all tapped out, which one still had juice. 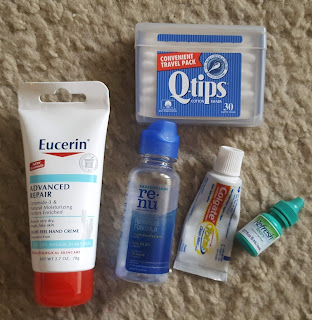 All the travel-sized things… Pack them! If nothing else, they help create a great feeling of accomplishment, as you finish each travel size bottle or tube. Especially since I’ve been working on my travel toothpaste stash for something like ten years.

Optimistic Me: And now that I’ve gotten rid of .3 fluid ounces of contact lens solution, I will have room for three pounds of souvenirs in its place. 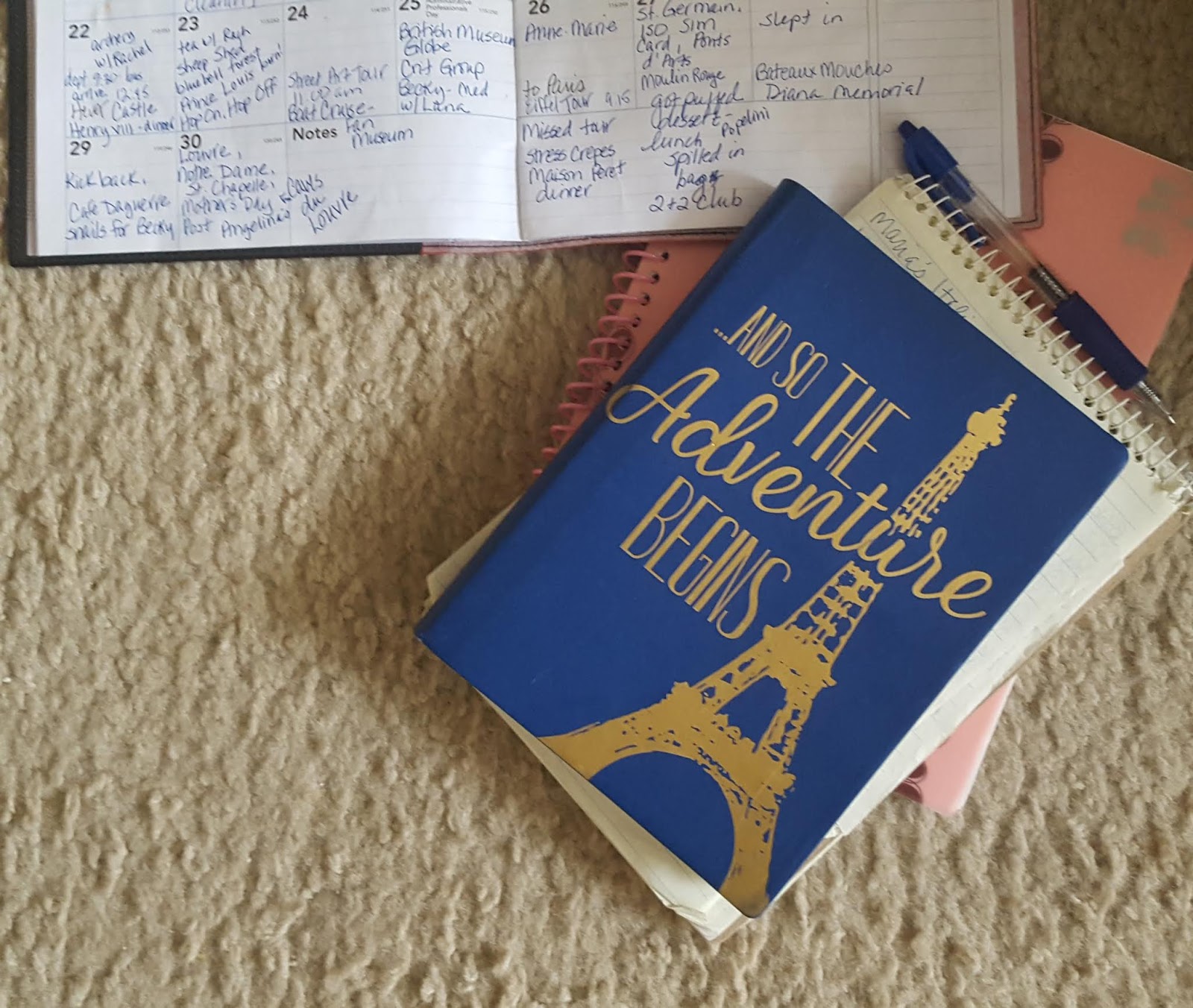 DO bring a calendar with lots of room for taking notes for what you did each day. I also brought a journal, because I was going to journal, every night, about that day and evening’s experiences.

Also, the extra notebooks I brought, in case I was seized with the creative inspiration and time to work on one of my fictional stories? See bwahaha, above. Extra. Dead. Weight. 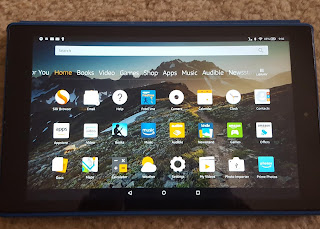 My Kindle Fire: Pack this, if you have one. I used mine to read a little, to play music, including soothe you to sleep stuff when I was having problems falling asleep, and to access social media. Several nights I streamed movies for the two of us to watch.

Note: there were a lot of documentaries and travelogues I wanted to watch and show my niece, about the places we were visiting, that were not available to stream, while we were across the Pond. So if there is something of the sort you really WANT to watch, download it while in America. 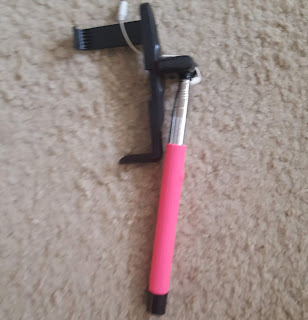 Selfie Stick – don’t bother. My niece brought hers, and we NEVER used it.

Many of the places we were visiting do NOT allow selfie sticks or tripods in the place, at all. Something about not wanting clumsy tourists to leave a gash across the Mona Lisa’s face or something.

Mostly you can get good selfies at arms’ length, or trade with other tourists to take their pictures, and then they’ll take yours. 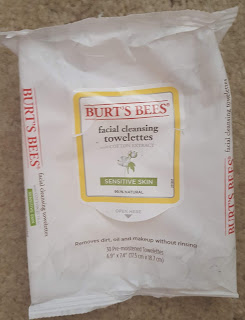 Some kind of facial cleansing, makeup remover wipes – oh, yes!! Used every day. And the premoistened wipes aren’t considered liquid, so they can go in the carry on.

Bring hair scrunchies, and whatever else you “do” your hair with. If you use a curling iron, like my niece does, make sure you have the kind of power converter that will work with it. Ours worked okay in Paris, but not in London. 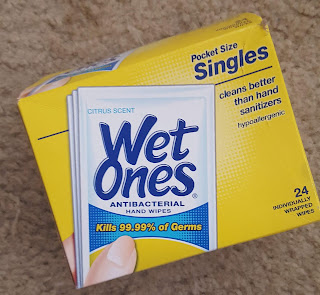 Wet wipes – a Yes, but. They came in handy on several occasions, but MOST places had access to running water and paper hand towels. Bringing a half dozen packets, rather than an entire box of 24, would have been plenty.

Travel neck pillows – ditch the old style ones, filled with memory foam, and get one of the inflatable ones. Try not to lose the carrying bag for it on the very first leg of the trip (but still, even if you do, it’s not a tragedy).

However, if you have sensitive skin and a particular brand of sunscreen specifically for the face works for you, do bring that.

Other suggestions: If you have a small, compact rainjacket, bring it. I used mine on several days. My niece also brought a down jacket that could be compressed into a small bag when not worn – and then the bag used as a small-of-the-back support pillow.

And now, my brilliant idea… My books and bookmarks.  Because they were going on tour, too. I had plans taking pictures of the books everywhere. Me, my tiara, and my book right up next to the Crown Jewels. And in all the places we visited.

My therapist suggested that instead of bringing my actual books, I get mock-ups made of the covers, and use those, to save on weight.

But how heavy could a couple of books be? I was running short of time, and besides, I wanted them to look AUTHENTIC.

My books were ridiculously heavy, especially as the day wore on. And many of the historic places, like the room with the Crown Jewels, didn’t allow photos anyway. If I were to do it again, I would bring half the bookmarks, and cover facsimiles, only. By the end of the trip, I was NOT lugging around one gum wrapper more than I had to. Sorry, Versailles, Marie Antoinette and company will just have to accept being photoshopped in, in future work. 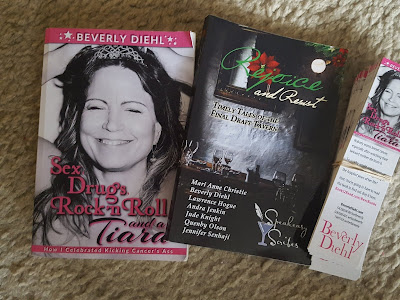 And of course, I forgot my tiara in my mad dash out the door to meet my Lyft. Which I had somehow ordered to pick me up at my work address rather than home address, but the driver was nice enough not to cancel on me despite that.

I did acquire a new tiara from Westminster Abbey, so I only had to spend a few days tiara-less.

There are dozens more stories and photos coming, but I wanted to start you – and your travel adventures, should you be planning any – off on the right foot.

Things you forgot you wish you’d packed? Or vice-versa?

One of my current earworms